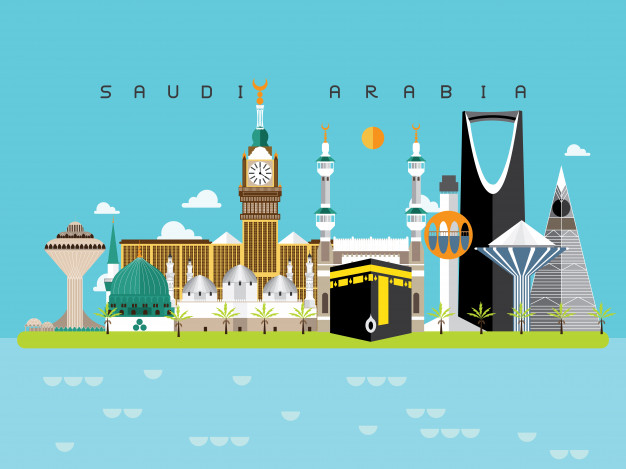 The Kingdom of Saudi Arabia lies at the furthermost part of southwestern Asia. It is bordered by the Arabian Gulf, United Arab Emirates and Qatar in the east; Red Sea in the west; Kuwait, Iraq and Jordan in the north; Yemen and Oman in the south.

Extending across most of the northern and central Arabian Peninsula, Saudi Arabia is a young country that is heir to a rich history. In its western highlands, along the Red Sea, lies the Hejaz, which is the cradle of Islam and the site of that religion’s holiest cities, Mecca and Medina. In the country’s geographic heartland is a region known as Najd (“Highland”), a vast arid zone that until recent times was populated by nomadic tribes.

To the east, along the Persian Gulf, are the country’s abundant oil fields that, since the 1960s, have made Saudi Arabia synonymous with petroleum wealth. Those three elements—religion, tribalism, and untold wealth—have fueled the country’s subsequent history.

The religion of Saudi Arabia is Islam, which means “submission” (to the will of God). Islam has been proclaimed to the world through the Prophet Muhammad who is the last in a succession of the prophets. Muslims recognize and revere the prophets of the Old Testament and Jesus Christ. With close to three quarters of a billion adherents throughout the world, Islam is one of the great monotheistic religions revealed to mankind. Islam is not only a religion preaching equality, tolerance of other faiths and submission to the will of God, but also, a practical legal system and a way of life, laying down rules for behaviour in private, social and business activities.

The Saudi Arabian Monarch exercises supreme executive and legislative authority and is the country’s supreme religious leader. The King’s authority is tempered by the Sharia (religious law).

The monarch presides over the Council of Ministers and various autonomous non-ministerial organization such as the Saudi Arabian Monetary Agency, the heads of which have ministerial rank.

The legal system is based on the Sharia, which is the Islamic law based on the Koran. The experience of modern political and economic relationships not defined in the Sharia have required new laws enacted by administrative decree.

The cultural setting is Arab and Muslim. To preserve the country’s purist religious position, many proscriptions of behaviour and dress are enforced. Alcoholic beverages are prohibited, for example, and theatres and public exhibition of films were banned in the 1980s. This ban on cinema was reversed in 2018, however, as part of a set of economic and social reforms implemented by Crown Prince Muhammad ibn Salman

Education is free at all levels and is given high priority by the government. The school system consists of elementary (grades 1–6), intermediate (7–9), and secondary (10–12) schools. A significant portion of the curriculum at all levels is devoted to religious subjects, and, at the secondary level, students are able to follow either a religious or a technical track. Girls are able to attend school (all courses are segregated by gender), but fewer girls attend than boys. This disproportion is reflected in the rate of literacy, which exceeds 85 percent among males and is about 70 percent among females.

Higher education has expanded at a remarkable pace. Institutions of higher education include the King Saʿūd University (formerly the University of Riyadh, founded in 1957), the Islamic University (1961) at Medina, and the King ʿAbd al-ʿAzīz University (1967) in Jiddah. Other colleges and universities emphasize curricula in sciences and technology, military studies, religion, and medicine. Institutes devoted to Islamic studies in particular abound, and schools for religious pedagogy are located in several towns. Women typically receive college instruction in segregated institutions. Many foreign teachers are employed, especially in technical and medical schools. Large numbers of students travel abroad for university study.

In an effort to improve Saudi Arabia’s status as a regional scientific hub and to help it compete in the sciences on an international level, in September 2009 the King ʿAbd Allāh University of Science and Technology was opened near Jiddah. The campus hosted state-of-the-art laboratories, virtual reality facilities, and one of the world’s most powerful supercomputers. The coed university—many of whose students were drawn from abroad—strove to provide a comparatively liberal environment relative to the rest of Saudi society: women were permitted to drive on campus, which was not allowed on public roads until 2018, and were free to veil or unveil at their discretion.

Military service is voluntary. The army accounts for about three-fifths of the total military force. It experienced rapid modernization especially after the Arab-Israeli War of 1967. The air force was equipped largely by the British until the 1970s, when the kingdom began to buy aircraft from the United States. It is now one of the best-equipped forces in the region, with several hundred high-performance aircraft; likewise, ground forces have large numbers of state-of-the-art main battle tanks. Army officers are trained at King ʿAbd al-ʿAzīz Military Academy just north of Riyadh. Major air bases are at Riyadh, Dhahran, Ḥafar al-Bāṭin (part of the King Khālid Military City) near the border with Iraq and Kuwait, Tabūk in the northwest near Jordan, and Khamīs Mushayṭ in the southwest near Yemen. All three armed services—army, air force, and navy—are directed by the defense minister, who is also the second deputy prime minister.

The National Guard, which has roughly the same troop strength as the army, is essentially an internal security force, though it can support the regular forces for national defense. One of its primary peacetime tasks is to guard the country’s oil fields. It is administered separately, and its commander reports to the crown prince. The armed forces employ expatriate personnel in support and training positions.

The kingdom has several internal security organs, including the Coast Guard, Frontier Force, and a centralized national police force. All of these organizations report to the Ministry of the Interior, which also supervises the country’s intelligence and counterintelligence bodies. Police interaction with civilians, particularly with foreigners, has often been described as heavy-handed, but reports of human rights abuses are far less numerous and severe than those reported in other countries of the region. There is also a religious police force attached to the Committee for the Promotion of Virtue and the Prevention of Vice. Known as the Muṭawwaʿūn (colloquially, Muṭawwaʿīn), this force operates in plain clothes and enforces such Islamic precepts as ensuring that women are properly veiled, that shops close during prayer, and that the fast is kept during Ramadan. Imposing impromptu corporal punishment for infractions is an accepted part of their duty.

A great deal of attention has been given to health care, and the numbers of hospital beds, physicians, and nurses have increased greatly. In addition to numerous health institutes, hospitals, and health centres, a network of dispensaries serving communities of 10,000 or more people has been set up, complemented by a system of mobile health services reaching small communities and the remaining nomadic populations. The government has also begun to train Saudis to replace foreign medical personnel.